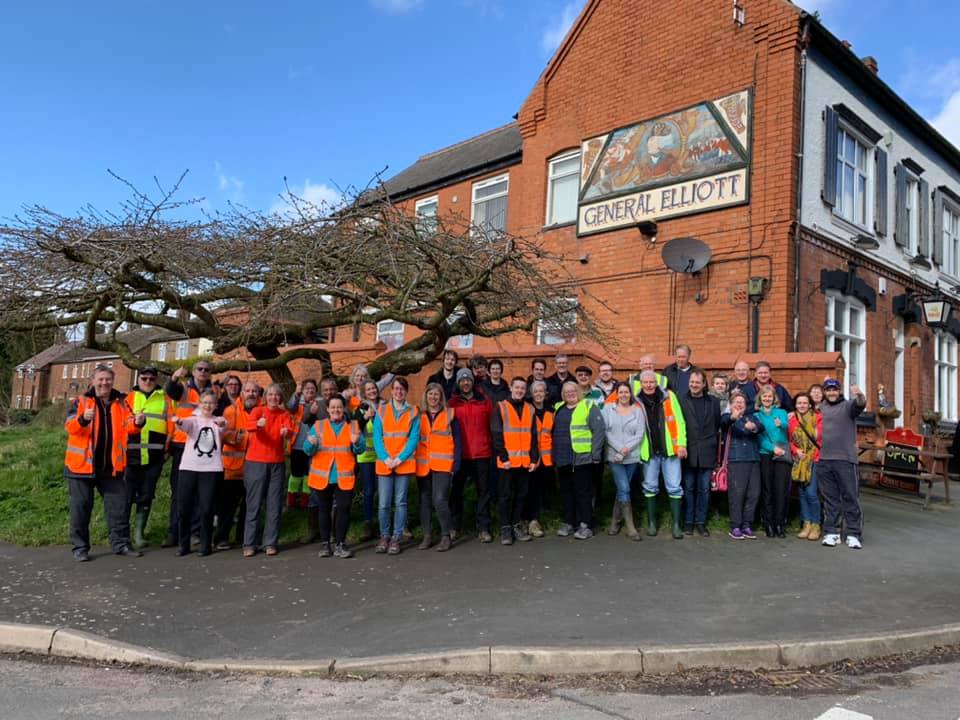 Despite being only a year old, the volunteer litter-picking group the South Leicestershire Litter Wombles now have (at the time of writing) 1,078 members on Facebook.

To mark the anniversary founder Bob Lee, with the help of Scott Gibbins, Geoff Walker and others organised their most ambitious ‘group pick’ yet clearing the two-mile stretch of roadside between Countesthorpe and Willoughby Waterleys.

More than 60 Wombles turned up for an 8.30am start (others were busy on smaller or individual ‘picks’) and between then and 11am collected a bed, a stop-go road sign, 27 tyres and wheels and 134 bags of rubbish.

The separated five bags of aluminium cans which will help Helipads For Hospitals provide a helipad onsite at Leicester Royal Infirmary.

As the litter-pick came to an end, BBC Radio Leicester presenter Helen McCarthy arrived to pluck the final clue from that morning’s broadcast of the feature Clueless from beneath the hat of Geoff Walker. The Wombles burst into a rendition of Mike Batt’s Wombles song.

At 11am the Wombles adjourned to the General Elliott pub in Willoughby where they had warming drinks and tucked into a delicious birthday cake generously provided by Blaby District Council member Paul Harsthorn along with flapjacks and other cakes donated by Wombles.

The Wombles have been separating aluminium since the autumn when they heard about Helipads For Hospitals through the Rotary Club of Leicester Novus.

Engineer Geoff Walker weighs them and estimates that the Wombles have contributed 35,000 cans to our appeal. Not quite so scientifically, he has developed his unique ‘Womble stomp’, crushing them under his walking boots. This is tremendously helpful, as it reduces the volume of the cans so they require fewer journeys — and less fuel — to take them to Stocken Prison where they are crushed ready for smelting.

Thank, you, Geoff and all the Wombles!