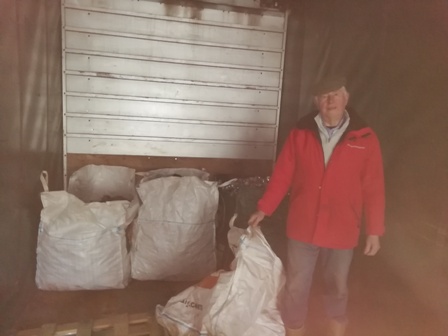 Thursday March 5, 2020, was a big day in the ongoing development of the charity Helipads For Hospitals.

Since the charity was set up in 2016, its founder, John Nowell, has driven thousands of miles to collect donated aluminium cans from locations all across the east Midlands. Often he had to make several journeys in a day with his home in Oakham being like the centre of a wheel with John having to travel along the spokes and back to drop off cans at his home.

But now — thanks to Andrew Neale’s offer of his 45ft-long, 15ft-high curtain sided articulated trailer — John is able to drop cans off at a more central hub 23 miles from his home. Andrew has very kindly allowed Helipads For Hospitals to store can there and to transport them periodically to Stocken Prison, where they will be crushed and smelted and used as the raw material for a hospital helipad.

John’s 14ft twin-axle trailer can accommodate five one-tonne builders’ bags. When the cans are crushed flat, each one-tonne bag can contain nearly 3,000 cans. If they are not crushed, each bag contains less than a third of that number.

On the first day of using the trailer John made trips to three donors all within nine miles of the trailer and left six bags containing an estimated 6,000 cans. Without the loan of Andrew’s trailer, John would have had to drive 107 miles. As it was he had to drive for about 84 miles.

As it was, it John was on H4H business — collecting cans from donors, emptying the Big Red collecting Bin at Glenmore Park in Shepshed — about seven hours.